Its been almost a year since my last blog and new folks are still finding us each day from googling “homesteading”, “westcliffe colorado” or (my fav) “realities of tiny house living”

I figured it was about time for an update.

We’ve been busy and our lives have changed a TON since I last wrote. Here’s a brief overview to get you caught up.

(if it wasn’t for my Instagram, there is NO way I’d remember what happened each month)

We started getting a ton of duck eggs and I decided to try dehydrating them…. Has anyone else ever done this and reconstituted them successfully??

We also had a massive snow storm (36+”) and our barn roof almost collapsed. #oops

The snow finally started to melt and the wildflowers appeared!

I also entered my third trimester.

We enjoyed a beautiful summer, although slightly stressful as we both were laid off from our jobs. Ryan almost immediately found more work, while I was able to spend some time at home waiting for the baby & attempting to do some very minimal indoor gardening.

July brought more waiting, eating, knitting, eating, growing, and eating. Did I mention eating? I ate all of those muffins in an insanely short period.

I also started drinking raspberry leaf arnold palmers daily. Pretty sure this not only contributed to my constant thirst, but also helped prep my body for labor.

We also met and hosted some new Tiny House friends, Christian and Alexis. They’ve been traveling around the country advocating for and teaching folks about the values of simple living through tiny house living.

A week early, we weren’t expecting him quite yet, but Ellis William (4lb, 10oz) showed up after a super quick labor in which Ryan almost had to deliver him.

I woke up around 1am and couldn’t sleep (normal at this point) and was also have some cramping. After a couple of hours of having semi regular pains, I woke Ryan up & texted my midwife. Both of them thought that the irregularity meant that they were Braxton Hicks. Advice: try to relax and they’ll go away. So I walked around the driveway, took a bath, and started re-watching Downton Abbey (naturally).

Around 8am my midwife call me to check up on me and I’m still having Braxton Hicks.

Her: “Oh honey. Those aren’t Braxton Hicks. You’re in labor.”

2 hours later, midwife runs in (we live 2 hours away from the closest town)

In all actuality, Ryan almost had to deliver Ellis. In between my contractions he would go outside to attempt to calm down. He said that our animals were responding to my yells. LOL He was awesome. I couldn’t have asked for a better hand to squeeze as hard as I possibly could. He prayed with me, helped me breathe, and didn’t freak out in front of me. PLUS: he delivered our goats last year and totally could have handled delivering our son;) HOWEVER: we’re both grateful that the midwife showed up when she did.

We started venturing out of the house. We all went to the Tiny House Jamboree in Colorado Springs. We really enjoyed catching up with Andrew Odom, Christian and Alexis and meeting many others. We wore Ellis in a sling and because he was so tiny many people asked if we were carrying a puppy- LOL.

We also started a property management company in Westcliffe. Which was awesome and started off super busy! We were able to both work together and bring the baby with us.

We were able to take a trip to Texas to see friends and family. We also enjoyed the Indian summer that Westcliffe experienced this year.

I started cleaning our barn – a task that needed to be done last year at this time, so the job required a respirator. Also still adjusting to life with little sleep, a lot of work, and a cute little buddy. We had several outdoor jobs that we were able to work together and bring the baby along. With the nice weather we had, Ellis enjoyed just taking naps in his carseat while mom & dad painted houses.

We also have experienced very strong winds this year (80-100+mph gusts) and one day were awaked with an automated phone call at 5am telling us to evacuate our home immeditaly because there was a massive wildfire in our area. Luckily, it headed the opposite direction from our home, but within a few weeks and after it was fully contained this fire was over 18K acres. We evacuated due to smoke for a couple of days, but came back and kept a wary eye on the smoke for the next few weeks. We’re so grateful to the 100s of folks who spent countless hours protecting our community from worse damage.

The season of apple cider & apple sauce – not that we made any, but our friends did and donated the leftovers to some very grateful goats. My sister also came to visit and babysat for us so that we could go on a date. As Ellis grew, he enjoyed helping mom with chores around the house and farm.

With the duck pond freezing over for winter, they have had to get creative about swim time LOL

Ellis also has really enjoyed having a Christmas tree (lights).

As we’ve grown and changed as a family this past year, we’ve also made some decisions that have affected our homestead. We have been growing a lot in our faith over the last year and really feel like this new year is bringing some more changes. With that sense, we’ve decided to sell most of our animals so that we are able to have more flexibility to leave the farm and spend some extended time seeking the Lord and pursuing what He has for us (more on this in a later blog post). 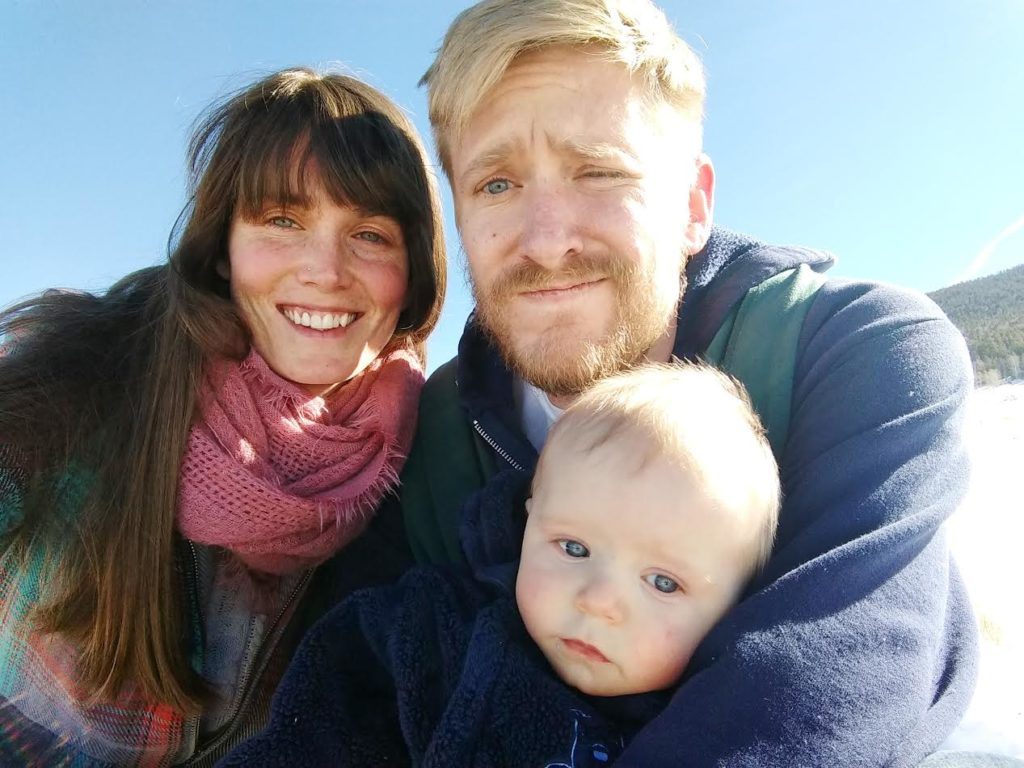 Westcliffe CO: And Back Again