I had never heard of a Tiny House until I met my husband in 2012. I met him in a coffee shop that I was working at in Golden, Colorado. He was living in Houston at the time and was just visiting family, who was traveling through the area. We had a lot in common; we’re both oldest children, both fairly stubborn, both enjoy learning, and we both wanted to live a life that was different than the average person.

I was working part time with a community non-profit at the time and his passion for alternative architecture (specifically tiny houses) was intriguing, although new to me. His first building project turned a small garage into a livable area while living outside of Washington D.C. Rent in that area is super high, so he renovated the garage space to be complete with kitchen, bathroom, and bedroom. This was the first time he realized that he was capable of creating something that offered an attainable living solution in a culture where the cost of living is so high.

He shared with me his dream of building and living in a tiny house. In fact, he had previously designed (though never built) over 40 homes that were under $20K and 500sqft. Those designs were lost when a hard drive crashed.

Very soon after we met and for his birthday in 2012, we had coffee in Boulder with Merete Mueller and Christopher Smith. They lit a fire in him and he started designing again.

He proposed Christmas day of 2012, and we quickly decided that we wanted a super simple wedding, since the date we picked was only 4 months away. How does one keep a wedding simple? Is this even possible?

Within the first week of being engaged, I was at Hobby Lobby (because where else do you go to start planning a wedding?) and was looking into the possibility of making our invitations by hand. I found paper, stamps, ribbons, stickers, and envelopes. Of course, it might take us 2 weeks to make them, but our invitations would be so Pinterest perfect. After 45 minutes of strategizing in the aisles of the mecca of the craft world: this stamp with that paper with that ribbon, with that paper laid on top of this one, I had two thoughts.

And then after a moment of sitting in the defeat and sensing my stress levels rising already:

(2)    “Wait a minute. What if I just said NO to trying to make this day perfect? What if I just realized my goal of this day (to have people I love in one place, celebrating me and my man) could be reached in MUCH easier ways than my culture tells me?”

Our wedding website told us that, according to the wedding date, we had 179 “to dos” and we were behind on 89 of them. According to The Knot, the average cost of a wedding in 2014 is almost $30,000. The Nerd Wallet has a neat tool estimating the cost of a wedding based on where you are located in the United States. Based on that, we could choose between an average cost of $42,033 in Golden, CO where we were located, or $39,113 in Tyler, TX where I grew up. The company, Statistic Brain, reported a study in which they itemized the average spent on specific categories when planning a wedding. Their average total cost of a wedding: $28,082.

(feel free to use, but please link back)

Now, we didn’t exactly have a choice in how much we spent or didn’t spend. This is because we were both extremely poor at the time. I was working part time with a nonprofit, part time at a coffee shop, and he was just getting started with his contracting business. It just wasn’t an option to have an extravagant reception, so we decided to try to pull off a potluck reception, asking each of the in-town guests to bring their favorite dish with a recipe to share. Instead of making or order invitations, we created a website and blog that we would continue to use after the wedding, to funnel people to the wedding website. We emailed and Facebook messaged people the links and added a personal message.

We knew that we couldn’t afford to order decorations, but in this case many people decide to go the “DIY” route. I had been to other weddings where this was the case, but it involved the entire family and wedding party using any free time before the wedding to make centerpieces or hot glue fabric flowers everywhere. I decided that instead of focusing on flowers or decorations for the ceremony, I’d use that time to just enjoy time with family and friends coming in town, and try not to just put everyone to work. So, I wasn’t planning on doing any decorating for the ceremony or reception.

However, my amazingly artistic sister took a pile of stuff that folks donated, and made the ceremony and reception a magical place. 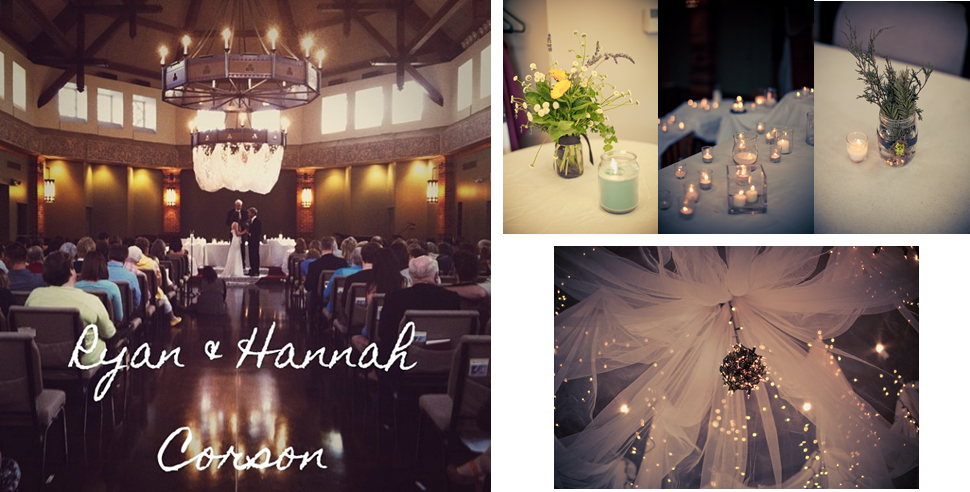 And yes, this did take over her life for the couple of days leading up to the wedding. My boss’s wife volunteered to organize the potluck meal at the reception as well as provided toasting beverages for the reception. A friend and amazing baker made us an amazing TINY HOUSE CAKE!

Another sister made around 200 cupcakes. 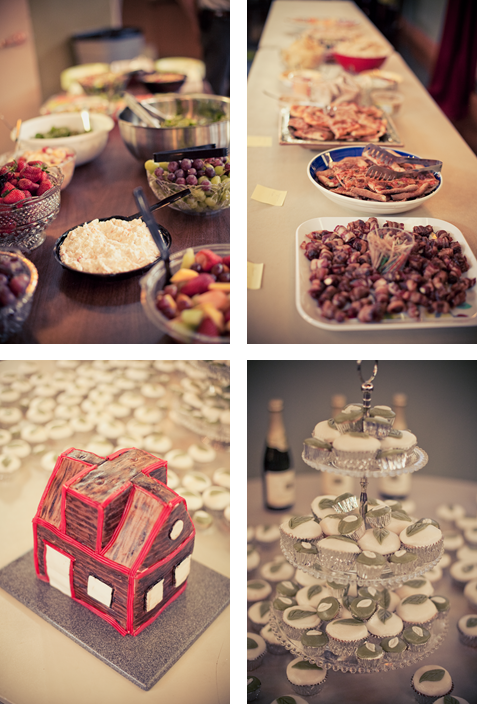 My life and garden mentor brought some herbs that I used for a bouquet. Another friend from college flew up from Texas to take pictures, pro bono. Some other friends let us use their cabin in Breckenridge for our honeymoon. My husband’s mentor flew himself up from Houston to officiate the ceremony. The list goes on and on. Our community in Golden and around the country came together for what we think of as our “barn raising” wedding. We couldn’t do it by ourselves, and it took the entire community’s involvement to pull off our wedding day, April 6, 2013. 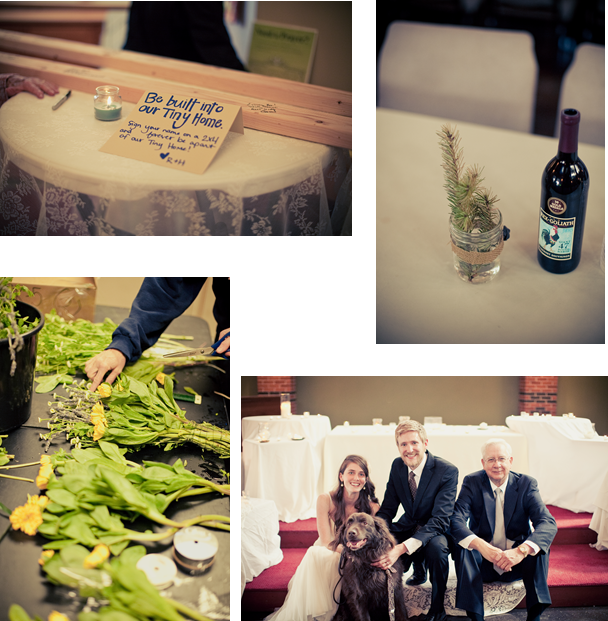 We definitely did (for the most part) stay true to our original vision of keeping this wedding as simple as possible for the sake of focusing on the things we care about. We quickly found out that the things we really care about are people. We both loved looking around the room at the rehearsal dinner, ceremony, and potluck reception and seeing how many different people from both of our lives were here to celebrate with us. 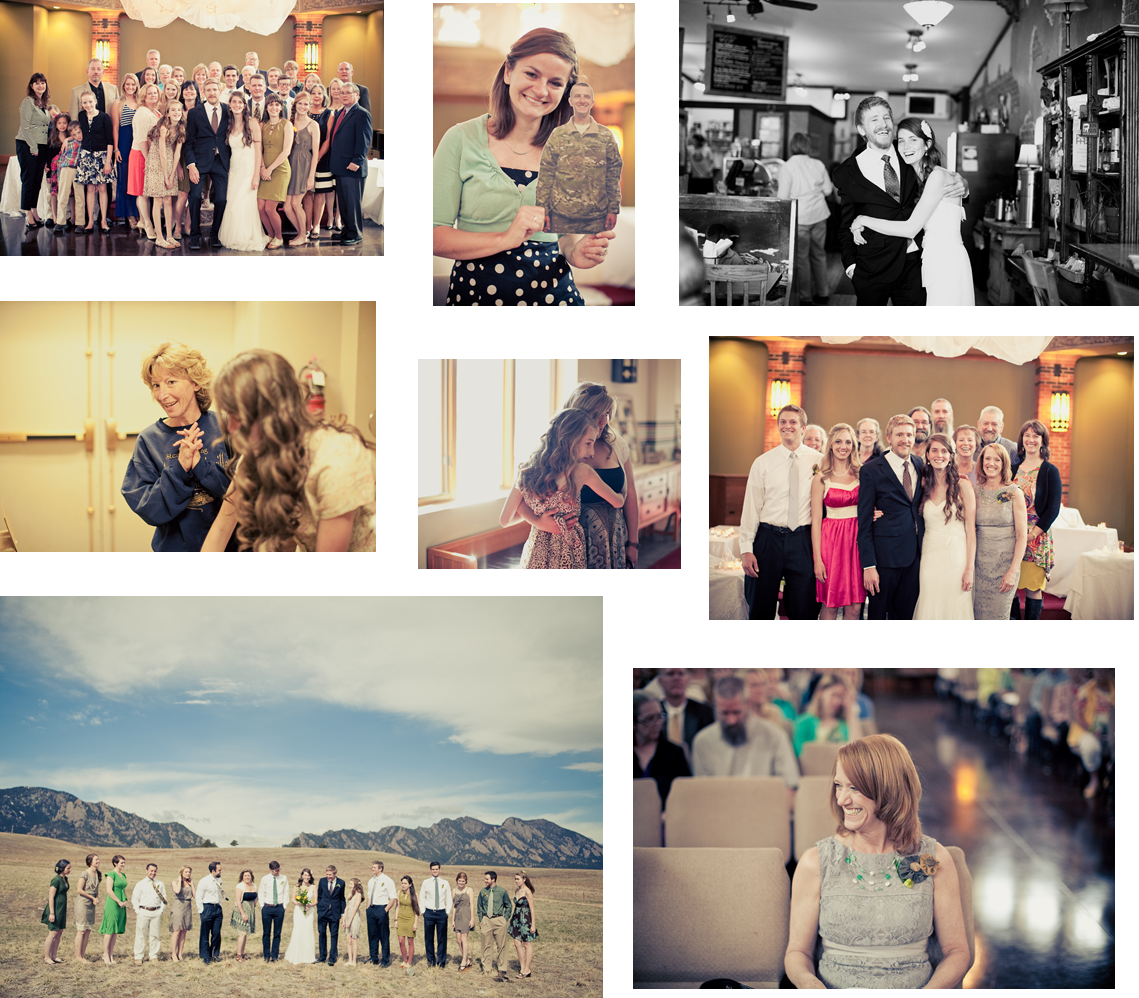 We knew that we wanted to build a tiny house in the near future, so instead of folks giving the typical toaster or popcorn maker, we requested that folks go online to our “Go Fund Me” site and give towards our Tiny House (we have now disabled the giving option, but kept the site active because it’s informative).

After the wedding we moved into a teeny tiny studio apartment (we estimate it was 160 sq. ft.) partially because the lease was month-to-month and we knew that we wanted to start working toward our tiny house, and partially because our original housing fell through the week before the wedding. It was great preparation for two people who wanted to live in a tiny house together. We weren’t exactly sure WHEN we were going to start building a tiny house, but when we found a goose neck trailer in June 2013 for a great price we started almost immediately. 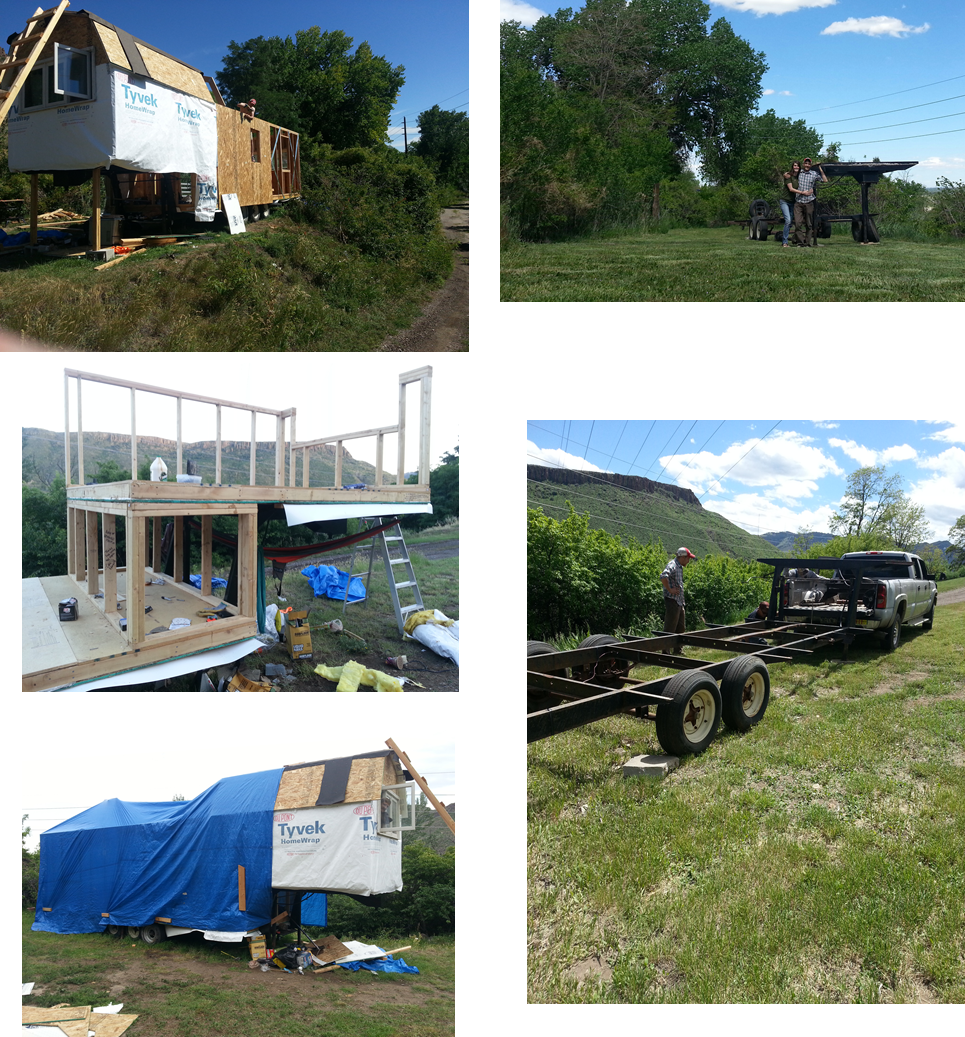 It was so exciting at first; we couldn’t believe that we were actually doing this! We had a friend who let us park the trailer and build on her land, which was very close to our jobs and apartment. We were both working several jobs at that point and would work on the trailer in the evenings, weekends, or between other jobs. Looking back, I see that we made progress pretty quickly (it did NOT feel like that at the time).

In July, our lease with the tiny apartment was going to require either a year commitment or us to move out. So naturally, we said, “Let’s move into the Tiny House until we finish it.” I remember thinking at that point that we would have it complete by September of that year. It’s the funny thing about any building project, I learned, is that it almost always takes longer than you think, and more money (if you want to read more about what it was like to live in an unfinished tiny house, click here).

October in Colorado is when the temperatures start dropping significantly in the evenings, and we found ourselves living in an uninsulated, unfinished tiny house. Oh, did I mention running low on funds? 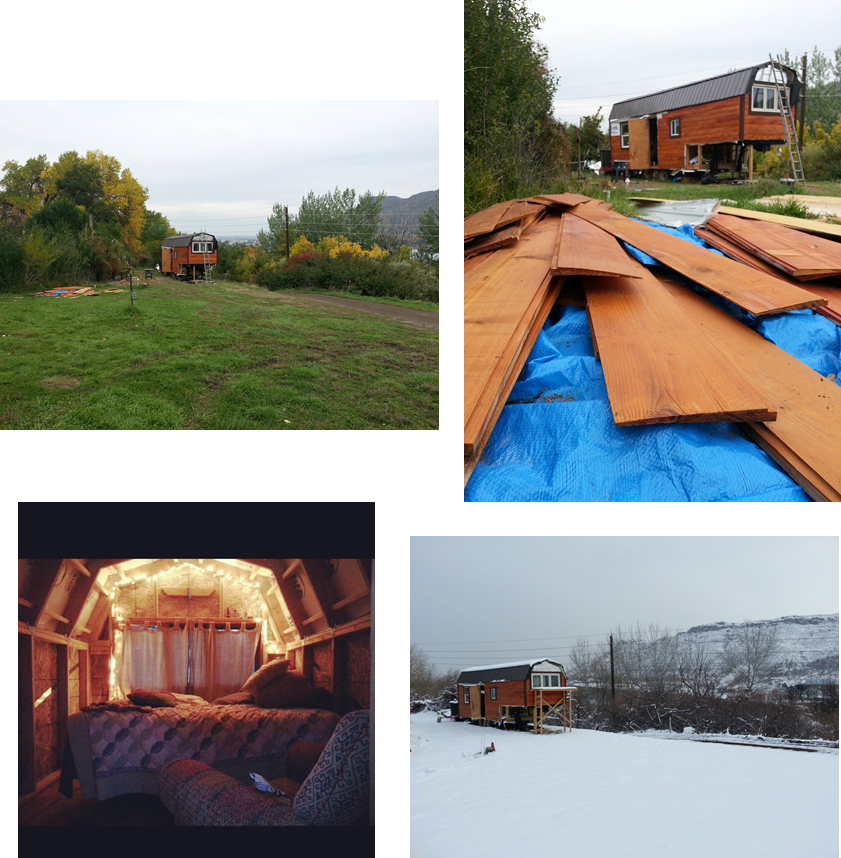 Finally the circumstances regarding the land we were parking our trailer on, forced us to make a decision about what we were going to do for the coming winter.

We decided to move to Westcliffe CO (our dream town), which was 4 hours south, and moved the Tiny House down in March. We had hoped to find decent jobs that we could make a living with and finish the tiny house. After 6 months of struggling to pay bills, we finally realized that we needed to move to a larger city to make money. So after living in Westcliffe for only 6 months, we moved back to the Denver area. The tiny house is currently on some friends land in Westcliffe, waiting for us to finish it.

We don’t exactly have the satisfaction that many tiny house stories have: a finished house. Some of the online articles that make it look super easy can sometimes be misleading, especially for folks who have never built a house before. Maybe the ones that make it look simple actually do have a solid 3-4 months to take off of work to build a small structure. Or maybe they have built 15 other tiny houses already and they have a system, a formula and they just crank out tiny houses like Chipotle cranks out those amazing burritos. Or maybe it is their first thing to ever build and everything just went AMAZINGLY- and that’s great! I’m only slightly jealous of them.

I know for us, it has been quite a journey; learning how to build things from scratch, learning how to use power tools (me) and getting super frustrated when I couldn’t operate the tools well, living in the tiny house for several months with no electricity or water, learning the difference between a gable and gambrel roof styles and also how simple the gable is…. (Sigh, next time), and trying to find drivers willing to drive a 20,000lb+ “tiny” house into the mountains. The list goes on. The last of the list has been coming to grips with the reality that we created this lovely beast to live in, and for now, we can’t live in it. That can be super frustrating sometimes.

But we’re young and our story is just starting. Plans change, life happens; projects remain unfinished for a time. We know that we both want a life that is full of purpose, meaningful relationships, laughter, creativity, knowledge, curiosity, and love. So for now, we’ll keep working hard at whatever we’re doing, whether that’s building a tiny house or working in the oil field or working as an administrative assistant.

So…our story? Well, it’s not quite finished yet. We’ll keep you updated. 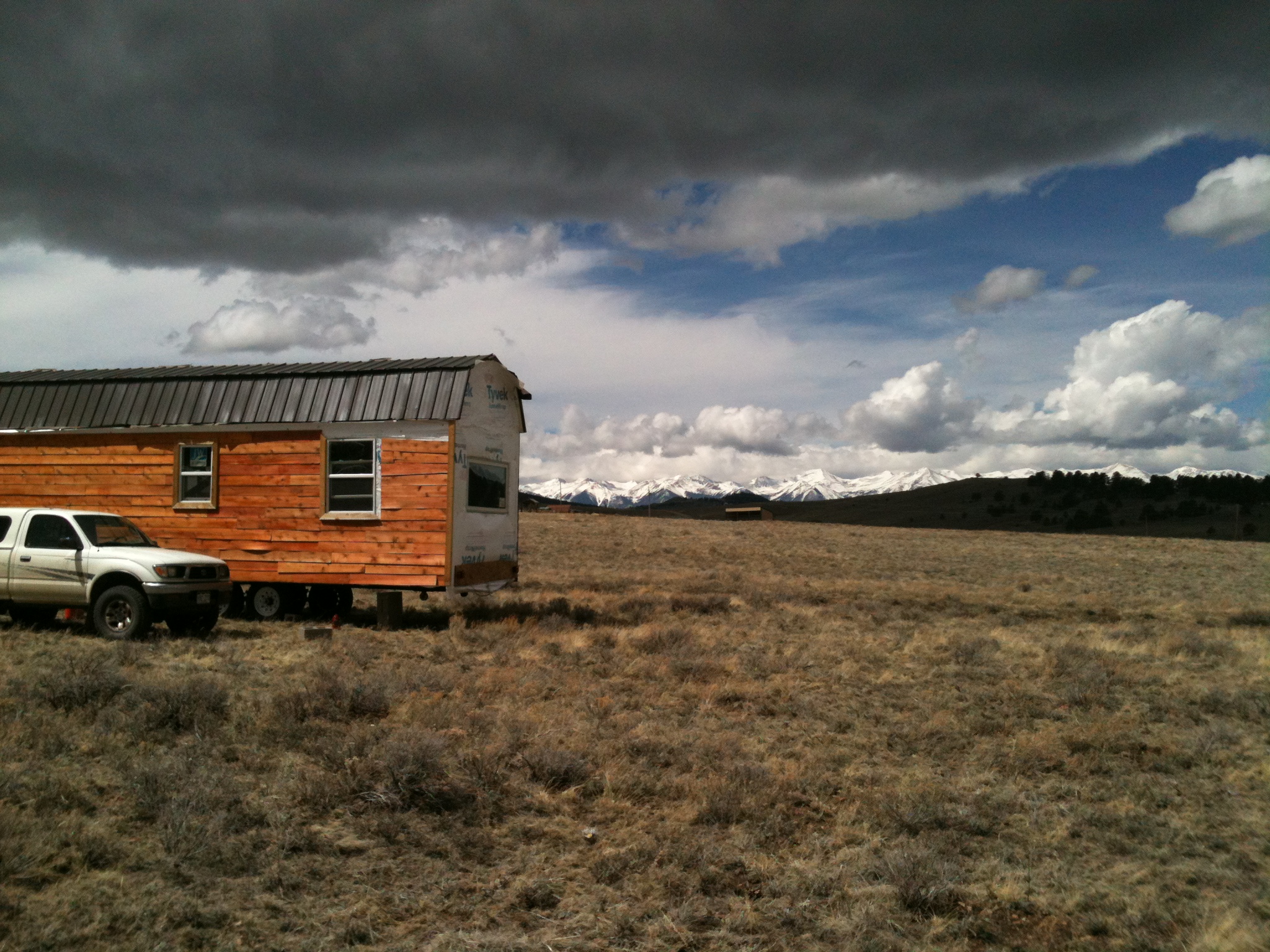 Plans have changed again and although we never planned it, we have sold the tiny house to some good friends who also bought our home, farm, and business. We are currently living in Pensacola Florida pursuing a life of ministry. Subscribe to our blog to stay updated!